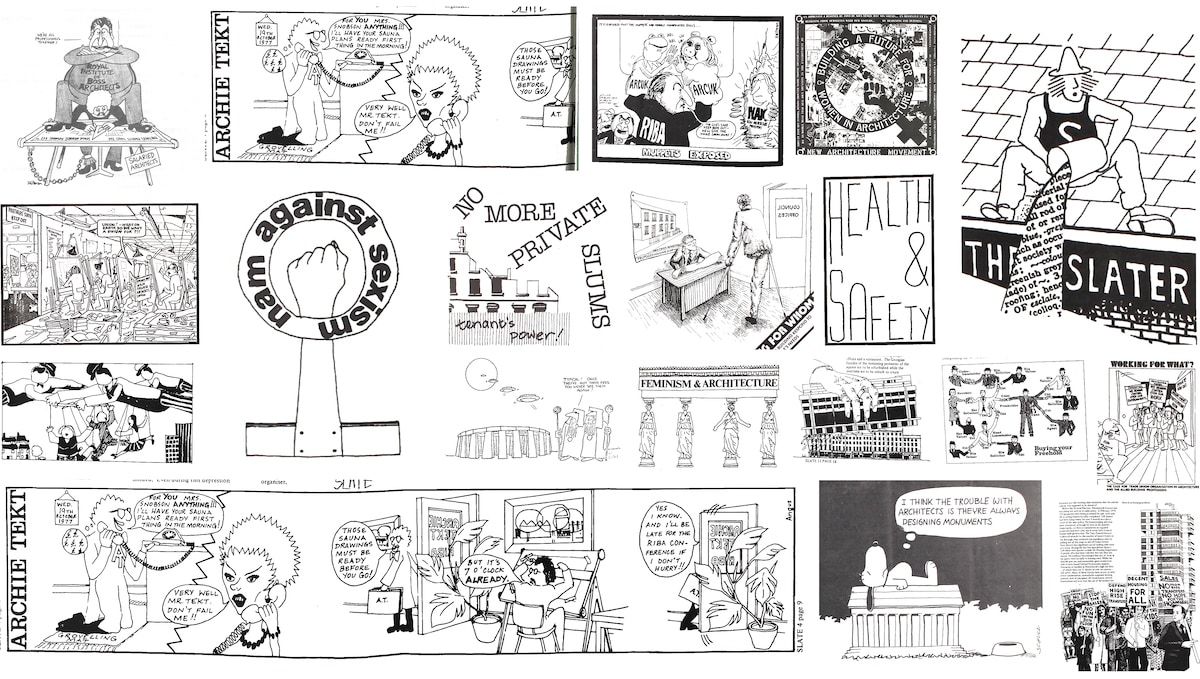 The New Architecture Movement (NAM) Digital Archive Project provides publicly accessible web-based digital access to the extensive archive of papers, correspondence, reports and other documents (including the 17 surviving issues of the self-published newspaper SLATE) that were produced by the Movement over its intensive period of activity from 1975-1980. The extent of NAM’s activity and the resulting material is introduced in more detail in the About page of the website. The archive project, undertaken over a period of several years and completed in 2022, has been peer reviewed by two referees engaged in academic research and social policy discourse that relate directly to the themes addressed in NAM's original work. The website carries most, but not all of the surviving original material and anyone wishing to survey the entire surviving NAM documentary record should consult the physical collection at MayDay Rooms.

The outcome is intended to provide a unique educational resource for both the study of an important episode in the radical politics of the architectural profession, and also for the benefit of a new generation of practitioners, academics, students and others more generally across the construction industry seeking to develop and apply equivalent critiques to the world of architecture and building production today. There is growing evidence in the current architectural training disciplines of prospective professionals searching for a deeper and more politically engaged understanding of the field they are about to enter. The NAM Digital Archive offers a substantial 'worked example' from recent history and a platform of ideas and experience from which to develop an equivalent new analysis of the contemporary situation. It is hoped that the archive will serve as both an authentic historical record and also as an active educational resource for the encouragement of new critical initiatives.

The project has been led by a steering group of original members of NAM who have contributed their own surviving original hard copy material to create the archive. The archive thus exists in both physical and digital form, the original material being preserved at MayDay Rooms in London, where it may be consulted by arrangement. (See contact details below.)

The archive has been structured in such a way as to mirror the original workstreams adopted by NAM in its active years, with material organised in a series of themes, titled ‘campaigns’, as indicated under the Campaigns tab in the main website menu. Each item is represented by an icon illustrating its cover or leading page. Items may be consulted by double clicking on the icon to reproduce the whole document at reading scale on the screen. An index for all items in the digital collection is included under the Index tab. These are likewise organised according to the same structure.

The website is not interactive or curated on a continuous basis. Feedback and comments are however welcomed and should be remitted to the NAM Archive, c/o MayDay Rooms at the address given. It is intended that the archive is maintained over a minimum 20 years period from 2022, and that a Legacy Group will undertake an annual review to check the following aspects of the website:

The NAM Digital Archive Steering Group gratefully acknowledges the support of the following, without whose generous assistance the project would not have been possible.

The Paul Mellon Centre for Studies in British Art, whose generous grant in its Digital Projects Programme 2020 has resourced the NAM archive project and secured its future preservation.

MayDay Rooms, for providing permanent accommodation for the preservion of the physical archive, and for their invaluable support in digitising material and hosting the digital website.

MayDay Rooms is an archive and educational space for activists, social movements and radicals established in 2013. It aims to safeguard histories and documents of radicalism and resistance by connecting them with contemporary struggle and protest, and by developing new free forms of dissemination and collective self-education. Our building in the centre of London contains an archive of historical material linked to social struggles, resistance campaigns, experimental culture, and the expression of marginalised and oppressed groups.

The core work of MayDay Rooms is to activate radical and experimental historical material, primarily through collaborative education, informal research, digitisation and online distribution. We are actively collecting materials from people who have been involved in past (and present) social movements, actions and interventions, attempts to transform the world, or fights against the powerful. We proceed from the understanding that social change can happen most effectively when marginalised and oppressed groups can get to know - and tell - their own histories "from below." Our archive focuses on social struggles, radical art, and acts of resistance from the 1960s to the present: it contains everything from recent feminist poetry to 1990s techno paraphernalia, from situationist magazines to histories of riots and industrial transformations, from 1970s educational experiments to prison writing. Our archival collections challenge the widespread assault on collective memory and the tradition of the oppressed. We aim to counter narratives of historical inevitability and political pessimism with living proof that many struggles continue.

Our Peer Reviewers   David Roberts and John Boughton, for their ongoing commitment to the project and valued attendance and advice at our numerous Steering Group meetings.

Our Website Designer   Raphael Judah for his professional expertise in designing the digital website and continued support over the extended period of its creation.